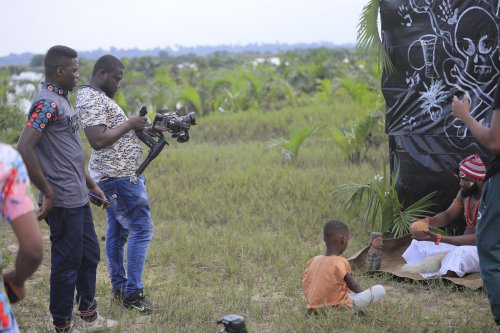 Ways the creative industry can help reduce unemployment in Nigeria

With the high level of unemployment and underemployment in Nigeria, choosing a career in the film and tv industry will be one of the smartest decisions you will ever make. Why do I say so, with an imaginable demand for visual contents this days. Video marketing is here to stay and the best thing you can do is to be part of the process. A statistic by YouTube shows that roughly 300000 individual videos are uploaded each day can you imagine the figure. So, tell me what's holding you from picking up a career in the film and tv industry.

They are a lot of Career opportunities in the film industry from film director, Director of photography to Film editor just to mention a few. Do you know that in 2018, the arts, entertainment and recreation industry represented 0.21% of Nigeria’s GDP at a value of nearly N270 billion? In the first quarter of 2019, the industry garnered approximately N87 billion which accounted for 0.27% of the country’s GDP. The Nigerian box office also contributes significant value; in 2017, N4.3 billion was realized and is expected to grow to an estimated N6.4 billion by 2022.
That's how large the film and tv industry is Nigeria you too can have a share in that money, so what are the way can you partake in contributing your own quieter to the growing film and tv industry in Nigeria.

YOU CAN BECOME A:

Film Director
The most popular of all filmmaker jobs and crucial to the completion of any film, directors are responsible for overseeing all aspects of the creative process and bringing them together.
This involves managing budgets, holding meetings with all departments at the planning, execution and post-production stages of filming, and concisely and effectively communicating your vision for the film.

Director Of Photography
Otherwise known as cinematographers, the director of photography will work with the film director to realise scenes in line with their visions. They manage the camera and lighting crews on a film set, make artistic and technical decisions and review footage in the post-production stage.

Film Producer
You'll oversee the creative process of a film from conception to completion, working closely with the director to make artistic and technical decisions about shooting, budgets and post-production.

Lighting Technician
In any film, good lighting is crucial to creating the right atmosphere. This is what a lighting technician brings to the production process through technical knowledge, a good level of physical fitness for lifting heavy lighting equipment as well as creative flair.

Programme Researcher
As a programme researcher on a film, you'll provide support to the producers, director and writers by carrying out factual and picture research to ensure what's being shown in the film is accurate.
Animator
An animator is an artist who creates multiple images, known as frames, which give an illusion of movement called animation when displayed in rapid sequence.

Writer
A screenwriter writes content for visual mediums. They write screenplays for feature films, short films, television, commercials, and video games. They create the dialogue, the characters and the storyline of a script.

End Remark
All this are many ways you can make money from the film and tv industry, with help of social media you can even build a huge followship and attract amazing opportunities for yourself as a filmmaker, opportunities like endorsement deal, sponsorships for your upcoming projects and amazing partnerships from big brands.
So why not take a rethink and pull yourself out of poverty and start building a career in the film and tv industry.

Schedule a call today to hop on the phone with one of our customer relationship manager to learn how we can help kick start your journey in the creative industry .